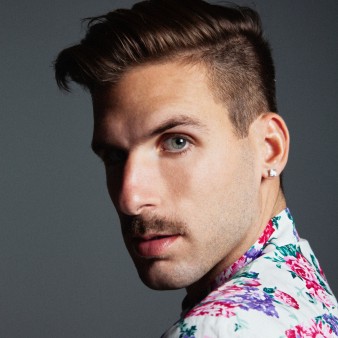 Justin De Bernardi is an international choreographer. A graduate from the Performance Dance program at Ryerson University and recipient of the Theatre Dance Award, De Bernardi is an independent choreographer, creative director & producer based out of Toronto, Canada. He is currently working with companies, dance studios and conventions internationally. Recently, Justin has performed with the Queen of Pop, Madonna (Addicted to Sweat), acted as the assistant choreographer for the Toronto production of Cinderella, A Pantomime Musical produced by Ryerson University and as choreographer for the productions Dance Me To The End Of Love, War & Peace and Brand New Ancients, touring in Greece. He is a featured dancer on the new hit television series Reign (CW Network), awarded Favorite New TV Drama at the People’s Choice Awards 2014 and is the focus of a documentary currently in creation by Anamatis Production that follows his journey as a choreographer.

Justin also had the honor of being recognized as one of Canada’s Youth In Motion, Top 20 Under 20 Finalist in 2010  & 2011 for his dedication, work ethic and passion to his craft. At the young age of 16, Justin began his first business venture in the dance industry. He is the proud co-creator of Dynamic Dance Workshop Company, a bilingual summer dance program awarded Student Business of the Year by the Chamber of Commerce. His love for dance goes beyond choreography, teaching and performing, Justin also recently launched with success Canada’s Newest Dance competition & convention, VIEW Dance Challenge.

Justin’s has recently joined the Ryerson University Faculty as the dance instructor for World Theatre & Dance. He is now expanding his boundaries and is beginning to work as a creative director & chorographer in Television & Film and producing live events. He is eager to share his passion, enthusiasm knowledge and love with individuals internationally.